Fabulous spring birding in Hungary, from the Zemplen Hills to the Hortobagy NP

THIS PAGE IS UNDER CONSTRUCTION, FULL DETAILS INCLUDING PRICES COMING SOON! IF YOU CONTACT OUR OFFICE, WE WILL NOTIFY YOU WHEN THE PAGE IS FINISHED.

Hungary in spring offers fabulous birding, featuring rare owls and woodpeckers sometimes at the nest, breeding wetland birds including marsh terns, waders and herons, speciality passerines with warblers, Bluethroat and reedbed specialists, key European targets such as Great Bustard, Lesser Spotted and Eastern Imperial Eagle, and passage migrants at a time of year when anything can turn up. A hectic and varied birding experience, particularly at lower elevations!

Day 1:         Saturday 15 May
After relaxing in our complimentary VIP Airport Lounge, we fly from London Gatwick to Budapest. Our first base on this three-centre tour is a small wine-producing village on the southern slopes of the Zemplen Hills. Birds on route will probably include Marsh Harrier, White Stork, Bee-eater, Red-backed and Lesser Grey Shrike, Crested Lark and Corn Bunting. We may also stop at a good site for Eastern Imperial Eagle.

Days 2 and 3:       Sunday 16 & Monday 17 May
We enjoy two days exploring the varied and scenic habitats of the area. Raptors here include Eastern Imperial, Lesser Spotted and Short-toed Eagle. We will probably take a picnic lunch in an area where these birds and also Black Stork regularly soar. There are plenty of more common birds too, such as Serin, Red-backed Shrike and Hawfinch. The deciduous forests of the Zemplen are home to Ural Owl and eight species of woodpecker including Grey-headed, Middle Spotted and White-backed. Other birds include Common and Short-toed Treecreeper and Collared Flycatcher. We will also visit stone quarries to look for Eagle Owl if birds are around. Other birds here include Black Redstart and Bee-eater which nest in small colonies. Wryneck and Syrian Woodpecker usually inhabit gardens, orchards and other "secondary" habitats rather than the forest proper and we will visit such places where Golden Oriole, Common Nightingale and Barred Warbler also occur. Pastures and wet-meadows along the River Bodrog are home to Corncrake, and Great White Egret and bushy areas have River and Marsh Warbler. On one evening those who wish can visit an old wine cellar for which the area is famous.

Day 4:           Tuesday 18 May
Today we leave the hills and cross the River Tisza for the Great Plain, where our second destination will be the famous Hortobagy National Park for two days. On the way we will begin to see more lowland birds such as Lesser Grey Shrike, Red-footed Falcon and Roller. We spend two nights here in an excellent base with traditional cuisine on the western edge of the area. Nights in Tiszafured.

Day 5:           Wednesday 19 May
We have a full day to bird this fantastic area, by bus and on foot.  Numerous fish-pond systems in the area teem with birds: we might expect Pygmy Cormorant, Black-necked Grebe, Great White and Little Egret, Squacco, Night and Purple Heron, Common and Little Bittern, Spoonbill, Yellow-legged and Caspian Gull, Spotted Redshank, Bluethroat (white-spotted race), Penduline and Bearded Tit, Moustached, Marsh, Savi's and Great Reed Warbler and Whiskered, Black and White-winged Tern. Raptors include Long-legged Buzzard. The Hortobágy also has extensive marshes and smaller brackish lakes with Garganey and Ferruginous Duck. Water Rail and Little Crake will almost certainly call and may show. We should also encounter some Common Crane and passage waders such as Ruff in breeding plumage and Green and Wood Sandpiper. Indeed almost anything is possible in this internationally important area. On our travels we will also no doubt come across the special livestock of the lowlands such as the mangalica (a grotesque woolly pig) and huge Hungarian grey cattle. Each evening we will dine on local specialities. Night in Tiszafured.

Day 6:          Thursday 20 May
Today we head back westwards to another wonderful national park, the Kiskunság. This vast flat region is relatively easy to bird, being very flat, with no hills to climb. at all. It also hosts some species in greater numbers than the Hortobágy, such as Hungary's national bird the Great Bustard, and also Roller. As we go we will stop at various sites, in particular for two other species for Hungary is important, Saker and Eastern Imperial Eagle. as well as White-tailed Eagle and Montagu's Harrier. Susliks, a kind of colonial ground squirrel, are often seen near our hotel. Nights in Kunpuszta.

Day 7:           Friday 21 May
Today we explore the Kiskunság's varied habitats - grasslands, farmlands, saltlakes, sand dunes and copses. The flat grasslands, called the puszta, are perhaps most famed for their Great Bustards and we will spend a morning in search of these magnificent birds. The superb Saker Falcon will also be high on our agenda. Other birds here include Tawny Pipit, Hoopoe, Crested Lark, Corn Bunting, the blue-headed race of Yellow Wagtail, Little and Long-eared Owls, Stone Curlew, Black-tailed Godwit, Roller and Lesser Grey Shrike. Red-footed Falcons nest in loose colonies and are particularly photogenic here. There should be more marsh terns around salt-lakes and fishponds and Mediterranean, Yellow-legged and Caspian Gulls to scrutinise by gravel pits. This is also one of the best places in Hungary to find Collared Pratincoles, and in some years the odd Black-winged Pratincole occurs with them. This really is a fantastic birding area.

Day 8:           Saturday 22 May
After breakfast we will drive to Budapest. If time allows (depending upon flight departure time) we will do some final birding on the way. Return to London Gatwick

• scheduled return flights between London Gatwick and Budapest, airport taxes,
• ground transportation as outlined including all transportation in Hungary in a modern and spacious air-conditioned vehicle,
• accommodation and all meals, including breakfast, lunch and dinner.
• the services of your leaders.
• entrance fees to parks and reserves, and tips to hotels and restaurants.
• The Heatherlea Pre-Flight Service offers everything you need at the airport, including hotels, car parking, airport lounges, regional flights, and upgrades. Let Heatherlea take the strain! Pre-flight airport hotel and lounge included free of charge subject to terms and conditions. Read more...

• personal insurance, drinks and other personal expenses, optional tips to the driver and local guide, and any other costs not specified as 'included'.

Accommodation is in comfortable hotels or guest houses with all rooms en suite.
Food Breakfast is continental style. Fruit juice and tea or coffee is usually available. Picnic lunches will be provided by your guide, and will include a variety of local produce plus soft drinks.
The country's unique cuisine has influences from the Central Asian Magyar founders of the nation, Turks, Germans, French, Austrians, Czechs, Slovaks, Serbians, and Croatians. The simple agrarian and shepherd lifestyles of the Hungarian Plain and mountains have also helped shape the country's unique dishes. Sauces rich in sour cream, delicacies such as goose liver and an emphasis on meats, including game such as boar and venison, are often on the menu. Fish stew or a thick and sometimes peppery fish soup - is also quite popular. Other traditional favourites include veal paprika stew and roast chicken with cottage cheese noodles. Gulyás (a hot dish that usually consists of beef, onions, capsicum and paprika), Halaszle (a Hungarian fish made with extra hot paprikas), Toltott kaposzta (cabbage stuffed with meat and other vegetables and spices) and Porkolt (a hot dish which is almost always made of meat, onion capsicum and paprika powder. Any kind of meat can be used, such as beef, lamb, pork, chicken, liver, offal and sometimes even fish). Fabulous desserts, served with strong espresso, include strudels, tortes and the legendary Gundel pancakes with chocolate rum sauce.
Walking is generally light/moderate. There may be some uphill track and road walking, though generally an average level of fitness is required.
Weather Hungary has a temperate climate, with cold, cloudy, humid winters and warm summers. The weather will most likely be quite warm, but chilly mornings and nights are possible. Rain is quite likely at this time of year.
Insects There may be biting insects, a good mosquito repellent is recommended.
Group size is restricted to 12 clients maximum.
Flights are by scheduled airline, from London Gatwick – regional departures may be possible, please ask for further details.

Gerard Gorman:  Born in the UK, Gerard has lived abroad for many years. A very experienced birding and wildlife guide, he has led over 500 group tours around the world, and speaks several languages. His main interest is woodpeckers, and he is author of a guide to all the world's species. Gerard will be joined by another from our team with seven or more clients. 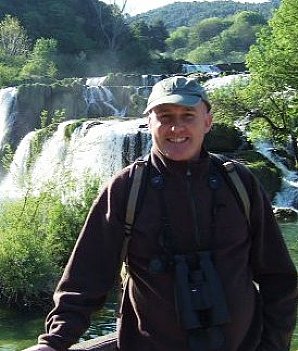 Other birding and wildlife holidays in Hungary