Austria is simply superb for both birds and birdwatchers. There are several 'eastern' specialities that are rarely, if ever, seen in the west of Europe, very diverse habitats including iconic Lake Neusiedl with its lowland wetlands and grasslands, vast old conifer and broadleaved forests, flowery pastures, and of course the famous Alps. The scenery is often stunningly beautiful, and with clean air, rushing streams and montane views, the first few days offer a refreshing contrast to the climate at home!

We will visit all the key habitats in the company of local experts who know this territory and its birdlife extremely well. This gives us the opportunity to maximise our birding by finding many species which otherwise wouldn't be available to the casual visitor.

This holiday will be ideal for those who want to see a good range of key Central European breeding species at a leisurely pace. Our key targets will include Great Bustard, Eastern Imperial Eagle, Golden Eagle, Montagu's Harrier, all ten European woodpeckers including Three-toed, White-backed, Black, Syrian, Middle-spotted, Grey-headed and Wryneck, Nutcracker, both Collared and Red-breasted Flycatcher, Citril Finch, an impressive list of warblers including Moustached, Savi's, Great Reed, River, Marsh, Barred and Icterine, both Bearded and Penduline Tit, Bluethroat (white-spotted), chances of Eagle Owl, colourful and always welcome species including Bee-eater and Hoopoe, and a wide range of wetland birds including herons, bitterns, waders, terns and many more.

The pace will be mostly moderate (we will ensure the odd stop for some authentic apple or cherry strudel!), with some optional hill walks. We visit in June when the mountains are free of snow and hence more accessible.

We hope that Heatherlea clients who have joined us in Camargue, Hungary, Czech Republic, Croatia and even Mallorca will find this a welcome addition to our holiday range. Full of excellent birding, with non-intensive days and good food and accommodation in three traditional Austrian 'gasthauses'. A destination developed by local experts, we feel that Austria will soon become a firm favourite with many of you.

Finally, this is a seven-day, six-night birding holiday, followed should you wish by an extension in romantic Vienna, which we can arrange for you under the protection of our ATOL Licence 6113.

Day 1: Wed 8 June 2022- Arrival and Transfer
After relaxing in our complimentary VIP Airport Lounge, we fly from London Gatwick to Vienna. We meet up with local guide Gerard, and head to the south-west through the region of Niederosterreich (Lower Austria) and into the foothills of the Alps. A leisurely drive of around one hour, we pass through quaint villages and by rushing rivers, to our base for the first two nights in a pleasant small town with a hinterland of Alpine scenery. Birds on the way may well include Red-backed Shrike, Dipper, Grey Wagtail, Black Redstart, Fieldfare and Black Stork. We stay here in the first of our 'gasthaus' style accommodations, family run places with good standards, which we prefer to larger hotels throughout the birding part of this holiday.

Day 2: Thur 9 June - Mountain and Forest Birding
Our first full day will be spent looking for montane and forest birds. We visit several birding spots in the foothills off the beaten track, where we will probably be the only birders in sight among superb scenery in mature mixed forest very different from that in the UK. Many sites here will be exclusive to our holiday, because they are known personally to our Guide and his local contacts. Species such as Western Bonelli's and Wood Warbler, Crested, Willow, Marsh and Coal Tit, Common Treecreeper, Firecrest, Goldcrest, Tree Pipit, Collared and Red-breasted Flycatcher, Common Rosefinch, Citril Finch, Hawfinch, Cuckoo and Nutcracker will be in our sights. Austria is home to ten species of woodpecker, and in this area Middle Spotted, Lesser Spotted, Grey-headed, Black, White-backed, Three-toed and the weird and wonderful Wryneck are all found.and Three-toed are all found.

Whilst it is unlikely we will find all Europe's woodpeckers during our holiday, you have a reasonable chance of the difficult species, including Three-toed and White-backed. Although sometimes difficult to pin down, Eagle Owl are also here, and we have chances. There are also Red Squirrel, which are not always red, some being decidedly black in colour!

Days 3 & 4: Fri 10 & Sat 11 June - Steiermark
Today we move a short way southwestwards into the higher mountains of Steiermark (Styria), where above pleasant grassy and flowery pastures and meadows, spruce forest, including some old-growth, dominates. Dwarf pine and then impressive rocky crags and peaks take over at the highest levels, and the views can be impressive. Birds we seek in this truly scenic Alpine landscape include Golden Eagle, Alpine Chough, Common Redpoll, Ring Ouzel and Water Pipit. Mammals we might encounter include Alpine Marmot, families of which will be out of their winter burrows at this time, and Alpine Chamois. Weather permitting (remember we will be in the mountains) we will take a chair-lift or ski-lift to get us up to the top of one of the higher peaks. We spend two nights here high in the Alps, again in a comfortable 'gasthaus'.

Days 5 & 6: Sun 12 & Mon 13 June - The Lowlands of Burgenland
After four nights in the Alps, we head eastwards and down to the lowlands of Burgenland. Great Bustard is an important target for us here. At this time of year we expect birds to form flocks, and our chances are excellent; we hope to obtain very good views of this key European species with hardly any walking.

The Austro-Hungarian border region of the Hanság hosts a cross-frontier National Park, and as we bird this region we'll see some remnants of barbed-wire topped fences (the so-called Iron Curtain) in former “no man's land”. The fact that the region lay on the east-west frontier meant that it remained relatively under-populated and was thus good for wildlife. After the political changes of 1989 many of the key areas were protected under the National Park.

Lake Neusiedl is Europe's largest and westernmost steppe lake, situated on the Austro-Hungarian border. The lake covers about 320 km2, more than half of which is reedbed. This is one of the warmest and driest parts of Austria, with hot, dry summers and cold winters with little snow. Smaller, shallow, saline lakes dot the adjacent Seewinkel area, and the whole National Park hosts a rich diversity of species. More than 150 birds breed, and another 150 use the area around the lake during migration.

There are also Crested Lark, Serin, Hoopoe, Golden Oriole, Bee-eater and Syrian Woodpecker, the latter often in villages and orchards. Our third 'gasthaus' is in the Neusiedlersee-Seewinkel region.

Day 7: Tue 14 June - Departure
After breakfast we head to Vienna Airport, where we catch our return flight to London Gatwick.

... why not continue your adventure with a personalised city break? You can decide how long to stay, choose your hotel from our wide selection, and fly home under the protection of our ATOL Licence 6113.

Walk in the footsteps of the Habsburgs, visit the splendid baroque Schönbrunn and Belvedere Palaces, and stroll along the magnificent Ring Boulevard to take a look at the Imperial Palace. Get a sense of the glory of the old empire by visiting St. Stephen’s Cathedral, the Spanish Riding School, or the Giant Ferris Wheel at the Prater.

Use your ‘Vienna Card’ to travel on the trams, subway and buses, enjoy the extensive shopping opportunities, and visit one of the famous Viennese coffee houses, which offer a wide variety of coffees, pastries, and pies and cakes. Look out especially for Bundt cake and Sachertorte!

Vienna is famous as the ‘City of Music’, and its concert halls and stages offer a wide choice, with music festivals seemingly running continuously. In the city of Mozart and Strauss, there is always a choice of concerts, opera and ballet.

Accommodation is in comfortable hotels or guest houses with all rooms en suite. These are family-run establishments, rather than big hotels, with good standards. We feel this type of accommodation is just right for our clients!
Food Breakfast is continental style. Fruit juice and tea or coffee is usually available. Picnic lunches will be provided by your guide, and will include a variety of local produce plus soft drinks.
Walking is generally light/moderate. There may be some uphill track and road walking, though generally an average level of fitness is required.
Weather Austria has a temperate climate, with cold, cloudy, humid winters and warm summers. The weather will most likely be quite warm, but chilly mornings and nights are possible. Rain is quite likely at this time of year.
Insects There may be biting insects, a good mosquito repellent is recommended.
Group size is restricted to 12 clients maximum.
Flights are by scheduled airline, from London Gatwick – regional departures may be possible, please ask for further details.

Gerard Gorman:  Born in the UK, Gerard has lived in Budapest for many years. A very experienced birding and wildlife guide, he has led over 500 group tours around the world, and speaks several languages. His main interest is woodpeckers, and he is author of a guide to all the world's species. 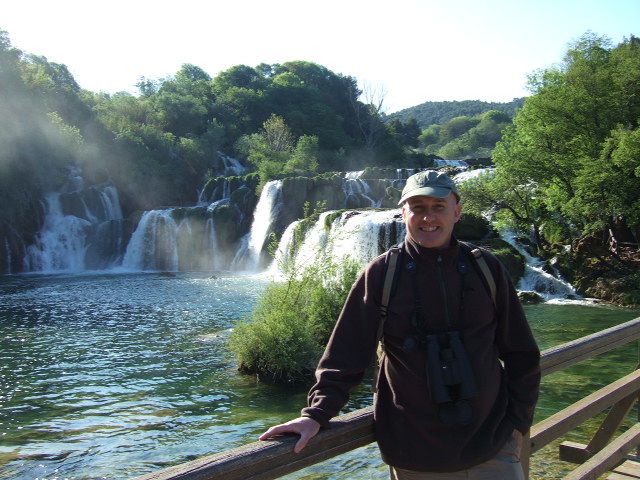