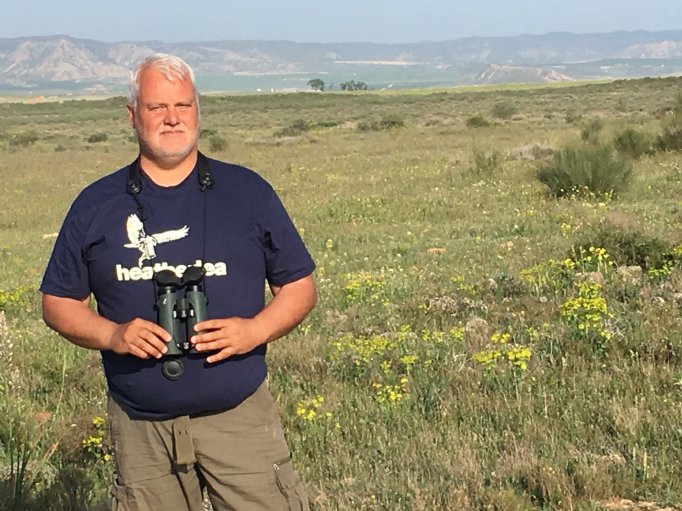 Sergi is a Catalan ornithologist with more than 25 years experience in the field. He is a ring bander and trainer with access to many ringing stations in multiple locations of Catalonia, several of which he set up himself. Specialising in the birds of both aquatic and steppe areas, Sergi has been working with Heatherlea for some time, sharing his exceptional knowledge of birdlife in his native country, and helping us to achieve big birdlists on our tours!

Fascinated with birds from an early age, Sergi decided at the age of 25 to make his living from his passion. Fortunately, his job allows him to spend many hours in the field and to visit very different places. He spends most of his time in the steppes of the Plana de Lleida and l'Estany d'Ivars - Vila-sana, but also much time in the Delta del Ebro, and in many other areas of the country. Sergi spends around 80 days ringing each year, many sessions accompanied by school visits. There are many rewards of course, and Sergi says; 'I remember a Robin recovered in the Delta del Llobregat that had been ringed the previous spring in Moscow!'

A leading ornithologist well known throughout his native Spain as one of the country's best birders, Sergi is a major asset on any tour here, his encyclopaedic knowledge enhanced by his vast access to up-to-the-minute news. With his gentle manner and non-stop commitment to birding, Sergi is one of the best local birders and leaders we have met! He says; 'I am in love with the drylands of Lleida, like the reserve of Mas de Melons; I would also highlight the Plans de Sió for the large number and diversity of raptors; always the Ebro Delta; the black pine forests of the Alt Pirineu Natural Park and one place discovered on my own, the drylands of Montsià.'